Cogeneration is a Promise for the Future 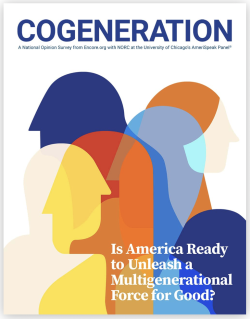 The well-respected Encore.org just announced it is changing its name to "CoGenerate." Some name changes can be viewed as simply refreshing a brand, but this particular one seems more substantive.

In an email to supporters, the organization explained the name change this way:

"As Encore, we helped change cultural expectations for the years beyond 50 and expand the contributions of older people. As CoGenerate, we’re focusing on what the vast and growing older population can do in collaboration with younger generations to solve society’s most pressing problems.

We call that intergenerational collaboration 'cogeneration,' and we believe it’s an essential and effective strategy to create connection across differences, combat polarization and ageism, and build an equitable, healthy, inclusive, productive, safe, and joyful world together."

Not surprisingly, the email was signed by Co-CEOs Marc Freedman and Eunice Lin Nichols. One look at their photos and it is obvious that the organization practices what it preaches: the two leaders are clearly from different generations.

A national opinion survey conducted by Encore.org with NORC at the University of Chicago's AmeriSpeak Panel validates not just the name change but the concept of "cogeneration." The survey reached 1,549 respondents, age 18 to 94 in U.S. households in March 2022. Here are some of the key findings:

The survey demonstrates a strongly positive desire for generations to know each other better and work together. It represents promise for the future of America -- if generations can find meaningful opportunities to collaborate and cooperate. That is the noble purpose of CoGenerate.