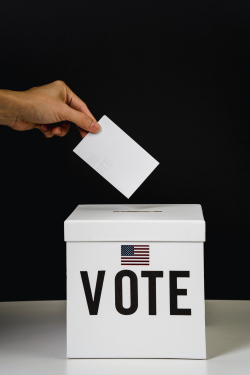 Older Americans tend to know that voting is a precious right. In the 2020 presidential election, for example, 76 percent of Americans ages 65 to 74 voted -- the highest of any age group, according to the U.S. Census Bureau.

Age plays another role in our national political conversation. Joe Biden was the oldest man to take the oath of President at age 78. Twenty-five U.S. Senators are more than 70 years old, and seventy-six U.S. Representatives are at least 70 years old. Does that matter?

It shouldn't, according to Dr. Dilip Jeste, a University of California, San Diego psychiatry professor and past president of the American Psychiatric Association and the American Association for Geriatric Psychiatry. Quoted in a NextAvenue article, Dr. Jeste says, "The media have often used derogatory terms like 'silver tsunami' to describe the rising numbers of seniors. This has led to greater scrutiny of older leaders in politics and elsewhere. Just as people should not be stereotyped and stigmatized because of their sex or race/ethnicity, they should not be discriminated due to their chronological age."

Jeste further points out that "Youth bring energy, excitement, ambition, and innovation, while older adults bring empathy, emotional regulation, self-reflection, and openness to diverse perspectives, which all are components of wisdom. Needless to add that not all the youth and all the seniors exhibit these traits, but many do."

Unfortunately, ageism is as prevalent in politics as it is in the American workplace. Just recently, in an interview on Sixty Minutes, Scott Pelley questioned Joe Biden about his age. Pelley said, "Mr. President, you are the oldest president ever. ...You are more aware of this than anyone. Some people ask whether you are fit for the job. And when you hear that, I wonder what you think." Pelley followed that up with this question: "How would you say your mental focus is?" While these may be legitimate concerns, it is interesting to note the manner in which the questions were asked -- by 65-year old Scott Pelley.

Hopefully, a voter is considering more important factors than age; in particular, whether the politician represents the voter's views and seems to be the best candidate for the job. Making age a determining factor in deciding for whom to vote is just one more example of ageism.

Photo by Sora Simazaki at pixels.com