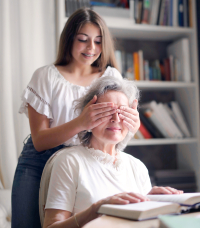 From the research cited above, it seems pretty clear that young adults are not necessarily choosing to live with their parents; rather it is circumstance, i.e. financial reality, that drives them into the multigenerational household.

Now imagine if there were a silver lining in this perhaps forced co-habitation. Could it be that such living arrangements turn out to be beneficial for both parties? Is such a living situation conducive to a new kind of family closeness and harmony -- or does it result in unpleasant interactions?

Some Boomers may recall childhood memories of grandparents living under the same roof with them, or perhaps, very close by.  When I was very young, I had a grandmother who lived with us for a time, and I remember treasuring the feeling of being spoiled by her! Is this a bad thing for three generations to be integrated into one household?

Financial circumstances may present some families with what could be a challenging choice. It is interesting to think about the dynamic that occurs when parents and adult children live in the same household -- and whether they can forge a new kind of relationship that's different from their previous parent/young child interaction. Who knows? Maybe accepting this new reality and accommodating each other's needs and wants may end up being an unexpected benefit to everyone.

Photo by Andrea Piacquadio on pexels.com