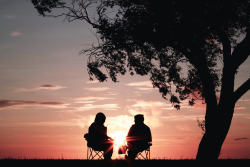 For some time, I've been following the important age-related research conducted by Edward Jones and Age Wave in partnership with The Harris Poll for some time now. The latest edition of their landmark study reveals some interesting observations about retirement "stages" and "paths" that is worth highlighting.

Not surprisingly, today's pre-retirees and retirees have adopted a very different definition of retirement from previous generations. According to the study, "a majority (59%) want to work in some way during their retirement, with 22% looking to work part time, 19% hoping to cycle between work and leisure and 18% wishing to work full time."

The study defines the four new stages of retirement:

"Retirees who report better quality of life took more steps decades in advance to prepare and plan across all the four pillars of Finances, Purpose, Family, and Health. From saving early and consistently and developing healthy habits to communicating with close family and discovering passions and interests, there are several steps pre-retirees and those early in retirement can take to make the most of their retirement."

This research offers valuable insights for all of us. Learn more about it here:
https://www.edwardjones.com/us-en/market-news-insights/retirement/new-retirement

Photo by Harli Marten on Unsplash