The Measurable Health Effects of Ageism 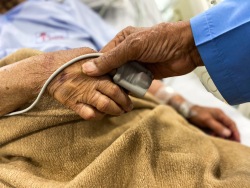 There I go again... writing about ageism!

The reason ageism is a recurrent theme with me is that ageism is a pernicious phenomenon -- a silent form of discrimination we don't expose often enough.

Ageism is typically based on unfounded beliefs and perceptions. Ageism is emotionally hurtful. And if that isn't enough, there is validated proof that ageism has a measurable impact on the health of older people.

Psychologist, epidemiologist and Yale professor Becca Levy has been studying the effects of ageism for over thirty years. In her new book, Breaking the Age Code, Levy shows how age beliefs shape all aspects of our lives. Some of Levy's research studies on the health effects of ageism were cited in a recent article in The New York Times. The specifics with regard to negative vs. positive perceptions of aging are fascinating.

For example, one study followed people for forty years. Individuals who, at young ages, had negative stereotypes about aging had twice as high a risk of suffering cardiovascular events such as heart attacks and strokes. In this same study, individuals who held negative beliefs about aging at younger ages "exhibited a sharper decline in the volume of the hippocampus, the brain region associated with memory. They also exhibited, after their deaths, more of the brain plaques and tangles that are Alzheimer’s biomarkers."

In another study, people over 70 who had "positive age beliefs" were found to be "more likely to recover fully from severe disability than those with negative beliefs."

This is striking evidence of the harmful health effects of ageism. It points out that there are real consequences of ageism that manifest themselves in symptoms and illnesses of older people.

In my view, this is not unlike the research that validates the negative health effects of race and gender discrimination. Still, it is worth noting that not everyone is of the same race, and not everyone is the same gender. However, everyone regardless of race or gender undergoes the aging process. If each of us lives long enough into our later years, by engaging in ageism, what are we really doing? It is ironically and tragically sad that discriminating against older people is basically discriminating against ourselves.