Home About Archives Books Subscribe
"I Know I Should, But..."
"Where's the Beef?"

Do You Experience Everyday Ageism? 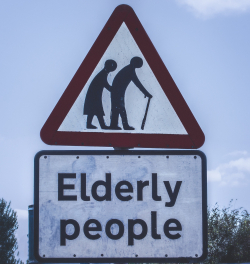 Everyday ageism is prevalent in the lives of older adults, as evidenced in research conducted by the University of Michigan National Poll on Aging. The poll, conducted in December 2019, examined older adults' experiences with forms of everyday ageism categorized into three groups: (1) exposure to ageist messages, (2) ageism in interpersonal interactions, and (3) internalized ageism (personally held beliefs about aging and older people). Overall, 82% of older adults reported regularly experiencing at least one form of everyday ageism in their day-to-day lives.

Nearly half of older adults (45%) reported experiencing ageism in their interpersonal interactions. In addition, 36% of adults age 50–80 endorsed at least one form of internalized ageism based on their agreement that feeling lonely (29%) or feeling depressed, sad, or worried (26%) are a normal part of getting older. Older adults who reported experiencing three or more forms of everyday ageism in their day-to-day lives had worse physical and mental health than those who reported fewer forms of ageism. Older adults who experienced more forms of ageism were also more likely to have a chronic health condition such as diabetes or heart disease than those reporting fewer forms.

On the plus side, the majority of poll respondents agreed that they feel more comfortable being themselves as they have gotten older (88%) and that they have a strong sense of purpose (80%). About two in three older adults said that they agree that as they have gotten older, their feelings about aging have become more positive (67%) and that their life is better than they thought it would be (65%). Overall, the vast majority of older adults (94%) agreed with at least one of these four positive views on aging and 51% agreed with all four statements. The good news is, regardless of commonly experienced everyday ageism, older adults have a largely positive perspective on aging. Still, that points to a disturbing disconnect between how society views aging and older adults' perception of aging.

If you're anything like the 50-to-80 age group respondents in this poll, you too have almost certainly experienced some form of everyday ageism. It may be a relatively harmless yet irritating experience, such as being called a disrespectful name by a retail store clerk or waiter. It may be exposure to a derogatory ad that degrades older people. Or it could be a lot more serious -- like routinely being discriminated against in the workplace because of your age. It is essential that we Boomers don't let any such experiences with ageism define who we are or what we believe about ourselves.

We can probably all agree with the conclusion of the researchers at the National Poll on Aging:

"Ageism is a product of American culture that should be acknowledged, discussed, and addressed. Increased consideration of how negative stereotypes, prejudice, and discrimination toward older people affect responses to major public health crises such as the COVID-19 pandemic could present a key opportunity to challenge assumptions that contribute to ageism. Addressing everyday ageism may have far-reaching benefits for the health and well-being of older adults."