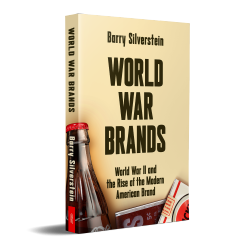 I'm excited to announce the publication of my new book, WORLD WAR BRANDS: World War II and the Rise of the Modern American Brand. This unique book takes a fresh look at the impact of World War II on America from a marketing perspective.

In this book you'll learn:

The post-war economy led to the rise of the American middle class and spawned a new generation known as "Baby Boomers." The war fueled strong economic growth that turned the country into a major global force. Post-war America became a bubbling cauldron of scores of inventive, innovative brands. When television came along, marketing those brands rose to a whole new level.

WORLD WAR BRANDS covers it all. Included are many stories about some of the best-known brands of the '40s and '50s. These are the brands Boomers grew up with, so this book is an adrenalin shot of nostalgia!

Kirkus Reviews calls WORLD WAR BRANDS "a convincing history about the role of World War II in developing brand consciousness among consumers in the United States." Sherry Tuffin, a reviewer for Reedsy Discovery, gives the book five stars and writes, "After reading WORLD WAR BRANDS you may never look at your favorite brands in the same way. What do I think of this book? In the words of Tony the Tiger, a brand superstar, 'It’s Gr-r-r-r-r-eat'!"

WORLD WAR BRANDS is available in paperback and eBook formats from all major booksellers.