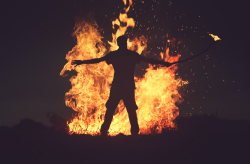 The title may sound like a bunch of older Americans in the Western part of the country fleeing current forest fires -- but this blog post is about a different kind of F-I-R-E: "Financial Independence, Retire Early." The FIRE movement gained traction with the under-50 set as a way to retire as early as possible by accumulating enough savings to fund a potential 50-year retirement. But the pandemic has cooled the interest in FIRE in one way and created a new class of adherents in another way.

One of the tenets often viewed as a cornerstone of retirement planning and part of the FIRE movement is the "4 percent rule." Here is a simple explanation of the rule from investment management firm Charles Schwab:

You add up all of your investments, and withdraw 4% of that total during your first year of retirement. In subsequent years, you adjust the dollar amount you withdraw to account for inflation. By following this formula, you should have a very high probability of not outliving your money during a 30-year retirement according to the rule.

This rule seems quite adequate for a 30-year retirement but much riskier for a 50-year retirement. According to mutual funds giant Vanguard, applying the 4 percent rule results in an 18 percent chance of running out of money at the end of thirty years, but there's a 64 percent of running out of money in fifty years. The fact is Boomers on FIRE could be more successful in sustaining their financial independence in retirement than younger generations on FIRE. Basically, if the 4 percent rule holds, the youngest Boomer at age 57 will probably not outlive her money in fifty years, but a 35-year old Millennial very well might.

A recent article in The New York Times suggests that, before the pandemic, Millennial FIRE enthusiasts aimed for frugality in an effort to retire as young as possible, but the pandemic is changing that thinking: "Now, most newcomers to the movement are less motivated by quitting and more interested in having choices — without sacrificing too many of life’s pleasures in the meantime. This objective also makes the movement more accessible; early retirement is just not possible for most Americans."

It turns out that the pandemic may have recalibrated the expectations of those younger workers who were on FIRE. Thirty-eight year old Jamila Souffrant of the website/podcast "Journey to Launch" told The New York Times, "“I think a lot more people would have stepped back from work during the pandemic if they had the means to do so, especially if they had kids stuck at home or didn’t feel safe at their jobs. Financial independence is a privileged endeavor, and it’s not realistic for most people — they’ve got mouths to feed, and they might not even be making a living wage."

Boomers, on the other hand, have generally seen their retirement funds balloon thanks to the recent bullish stock market. As I wrote in my last post, retirees are for the most part optimistic and resilient, even when they retire early. Millions of Boomers have left the workforce during the pandemic, maybe because they are confident their financial independence is solid and their money will outlive them. That's a whole lot of Boomers on FIRE.

Photo by Mohamed Nohassi on Unsplash