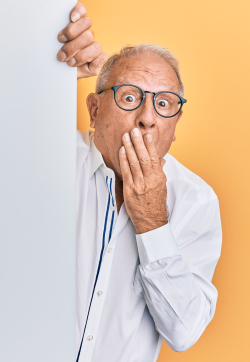 Excuse me for being repetitive, but I'm writing about age discrimination in the workplace...again.

I recently wrote about the economic impact of age discrimination. Now I want to talk about the human cost. A research study jointly conducted by New York University and Stanford University revealed that younger workers are persistently prejudiced against older workers -- and the younger the workers are, the more ageist views they hold. In fact, the study found that workers who openly oppose racism and sexism in the workplace are still prejudiced against older workers.

Richard Eisenberg of NextAvenue asked Michael North, one of the researchers, some penetrating questions about the study. North expressed this disturbing takeaway from interviewing younger workers: "There's this sort of subtle tension where older adults are expected to step aside and get out of the way and stop creating this perceived logjam in the distribution of resources or jobs or positions of influence, so the younger generation can get their turn."

North said he believed that "ageism is socially condoned to a point where it's not uncommon for folks to overlook it as a prejudice." In a 2014 article he co-authored for Harvard Business Review, North wrote about four specific ways companies could adapt to an aging workforce:

According to the article, "Companies that make these changes have seen tangible improvements in retention and productivity, organizational culture, and the bottom line."

Despite these accommodations for a workforce that is aging, age discrimination in the workplace is widespread. A recent research study by Generation, a global employment nonprofit, cites some sobering statistics. As reported by Kerry Hannon for NextAvenue, "Employers view just 18% of age 45+ job seekers as having the right experience for their entry and intermediate level roles, according to the report. Only 15% are viewed as being a good 'cultural fit' with their team." Sadly, this contradicts reality, since when 45+ workers are actually hired, "87% of those employees perform as well, or better, than colleagues a decade younger."

This kind of workplace ageism takes a human toll: "Of those surveyed who were unemployed, 63% of 45+ job seekers have been out of work for more than a year vs. only 36% of job seekers 18 to 34."

Hannon spoke with Generation CEO Mona Mourshed, who was one of the report's researchers. Mourshed indicated that ageism was not just limited to any one country or any particular industry. "One of the most striking findings of this result is it's uniformly consistent across dramatically different countries," said Mourshed. "We surveyed seven countries —  large, small, emerging markets, culturally diverse — but this phenomenon is a hundred percent universal. Same pattern, same magnitude, from industrial to service professions, from skilled trades to tech jobs."

Mourshed's observations are worth noting. "It's so important that age is considered part of diversity, equity, and inclusion," said Mourshed. "We must have an intergenerational workforce and we should have processes for recruiting and for retention that enable that."

The research findings can be discouraging, but if you are a Boomer who wants to continue to work, you'll need to find ways to prove your value to prospective employers. Mourshed believes "many more aged forty-five-plus have the potential to do the job if only they can get in through the door."

Photo by krakenimages on Unsplash

Props to Happily Rewired for again writing on the topic of age discrimination in the workplace. Enough cannot be said about this critical issue that affects millions of job hunters over 50 being turned away because of what I believe is a fundamental problem with the hiring culture.
We in the over 50 community must keep advocating for fundamental reexamination of HR polices regarding demographic reality, as it relates to the needs of our cohort. High-level Human Resources leadership must act and take seriously their role in the eponymous career they have chosen to endeavor. It is time for them to stand with us in the forefront of progressive thinking and play their role in the demographic paradigm shift that has already arrived. BoomerRevolt.com