The Resiliency of Retirees 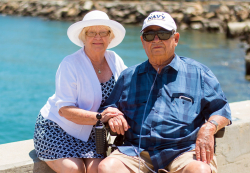 Looking back at the last twelve to eighteen months, it would be perfectly legitimate to think retirees have adopted a pessimistic attitude. The damaging impact of the COVID-19 pandemic on every aspect of life certainly cannot be understated. But like a phoenix rising from the ashes, American retirees have a kind of resiliency that keeps them not just positive but optimistic about the future. In fact, the optimism of retirees may be one of the under-told stories of the pandemic.

The 31st annual Retirement Confidence Survey (RCS) proves the point. Conducted by the Employee Benefit Research Institute (EBRI) in association with Greenwald Research, the RCS is the longest-running survey of its kind, measuring worker and retiree confidence about retirement. The 2021 survey, conducted in January 2021, surveyed 3,017 American workers and retirees. Just over half of the respondents (1,510) were retirees. Let's take a look at some of the statistics from the survey as they relate to retirees:

For a majority of retirees, their income from Social Security is stable, their Medicare insurance is adequate and their personal savings and retirement plans have probably increased in value because of a generally high-flying stock market. Retirees are also consumers -- and for June and the four months prior, the Consumer Confidence Index(R) increased, and "is currently at its highest level since the onset of the pandemic’s first surge in March 2020," according to Lynn Franco, Senior Director of Economic Indicators at the Conference Board. "Consumers’ short-term optimism rebounded, buoyed by expectations that business conditions and their own financial prospects will continue improving in the months ahead. While short-term inflation expectations increased, this had little impact on consumers’ confidence or purchasing intentions."

All things considered, retirees seem to be a resilient bunch. That just may be a silver lining for Boomers starting to emerge from the COVID-19 lockdown.

Image by Kim Heimbuch from Pixabay