Ageism is a Global Issue 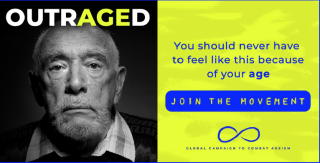 Who would think that WHO (the World Health Organization) would launch something called the "Global Campaign to Combat Ageism"? But they just did, stating this compelling reason:

"Ageism is the stereotyping, prejudice, and discrimination against people on the basis of their age. Ageism is pervasive and has profound negative consequences on older adults' health and wellbeing. We need to act now to improve the lives of people everywhere. In response to a call from Member States, WHO is leading and working with other stakeholders on a Global Campaign to Combat Ageism that aims to build a world for all ages by changing the way we think, feel and act towards age and ageing."

In WHO's 200-plus Global Report on Ageism, the organization reports, "Globally, one in two people are ageist against older people." WHO says "Ageism has serious and far-reaching consequences for people's health, well-being and human rights. For older people, ageism is associated with a shorter lifespan, poorer physical and mental health, slower recovery from disability and cognitive decline. Ageism reduces older people's quality of life, increases their social isolation and loneliness (both of which are associated with serious health problems), restricts their ability to express their sexuality and may increase the risk of violence and abuse against older people."

WHO believes three strategies can reduce ageism: Policy and law, educational interventions and intergenerational contact interventions. The organization's three recommendations for action are:

In an effort to jumpstart the campaign, WHO has created a "Toolkit" for anyone who wants to help fight ageism. It includes resources to inspire conversations, organize events and spread the word via social media and other methods. I have included a link to the Toolkit (PDF) here:

American Boomers are in a unique position: We ourselves are often victims of ageism, especially in the workplace. But we are also one of the most appropriate groups to combat ageism. I encourage everyone -- of any age -- to download the Toolkit and join the fight. Ageism is a global issue, and as WHO says, "It is time to say no to ageism."