Home About Archives Books Subscribe
Is It Time to Become "Organized Radicals"?
The Four Pillars of the New Retirement - Pillar 2: Family

The Four Pillars of the New Retirement - Pillar 1: Health 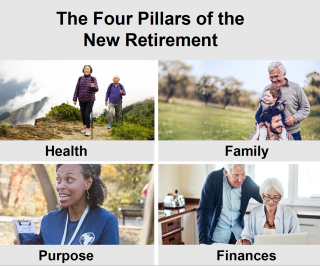 In a previous post, I mentioned an important new study called "The Four Pillars of the New Retirement," issued recently by Edward Jones in association with Age Wave and The Harris Poll. Since then, I have had the opportunity to attend a webinar that presented the report's highlights, and I've also gained access to the full report. This information is so significant to Boomers that I am devoting several posts to cover each of the four pillars: Health, Family, Purpose and Finances.

Before discussing Health, here's a brief overview: This was a major study comprised of a comprehensive examination of 100+ North American studies, articles and publications; in-depth interviews with subject matter experts and financial advisors; online forums and focus groups;  a survey of 9,000 adults across five generations (18+), including retirees and working-age individuals, in the U.S. and Canada fielded in May and June 2020; and exhaustive analysis by team members. As the COVID-19 pandemic spread, the study was paused and modified to include specific information about the effect of the virus on retirement.

The term "new retirement" emerges from a first datapoint in the study: 55 percent of retirees define retirement as "a new chapter in life."

When asked if they have suffered a mental health decline since the COVID-19 pandemic, only 8 percent of the Silent Generation said yes. The percentages for other generations were: Boomer - 15 percent, Gen X - 25 percent, Millennial - 27 percent, Gen Z - 37 percent.

Pillar 1 presents a complex picture of aging statistics and the manner in which generations view health issues as they age. While 93 percent of retirees agree it's never too late to improve your health, only 55 percent say they maintain a healthy diet, and only 52 percent say they exercise regularly. Analysts call this an "intention/action gap." Of the Silent Generation, 34 percent rank their physical health as good to excellent, but 67 percent rank their mental health as good or excellent. For Boomers, the percentages are 34 percent and 62 percent respectively.

When the study data was analyzed by geographic area rather than age, 72 percent of those who live in a small town said their mental health was very good to excellent vs. 64 percent for suburb, 58 percent for rural area, and 58 percent for large city.

Retirees are concerned about brain health as they age. Almost a third (32 percent) said the condition they feared most in later life was Alzheimer's/dementia. Cancer was second (21 percent), followed by contagious disease such as COVID-19 and influenza (19 percent).

While the average life expectancy in the United States is 78.5, individuals are expected to spend ten years in poor health. Both lifespan and healthspan vary widely based on the state in which someone resides.