Is It Crazy to Start a Business Now? 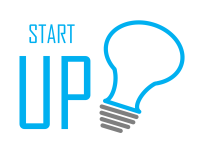 In my last post, I talked about a potential strategy for getting your life back, and I proposed a three-part plan: Re-enter, Re-evaluate and Re-trench. I believe the three "re's" represent a practical, measured way to emerge from the pandemic with a set course of action.

As part of the "Re-evaluate" phase, you may be considering what your current and future work life should look like. If you have been laid off, you are certainly not alone -- but as a Boomer, you are more vulnerable than most other workers. It should come as no surprise that Boomers face significant age discrimination when it comes to being re-hired by a previous employer or getting a position with a new employer. While it is often a short-sighted strategy, the harsh reality is that employers often opt for younger employees who simply cost less than Boomers, despite our experience and work longevity.

Writing for Entrepreneur, Rick Terrien makes a strong case for older workers to be proactive about their future by launching a 1-person business now. He writes:

"Being proactive allows you to grow your networks and put the building blocks in place to work and contribute as long as you want. For most people, it is easy and inexpensive to launch one-person Limited Liability Companies (LLCs). Creating a professional business shell around yourself gives you an independent  economic platform to experiment with as you test and grow your business model.

Having your own small-business shell around yourself does not guarantee success, but it does give you access to tools you will need to succeed."

The statistics are both encouraging and daunting. Terrien points out that 25 million of the 32 million businesses in the U.S. are actually 1-person businesses. A study cited in Inc. magazine indicates that a 60-year old who starts a business is three times more likely than a 30-year old to start a successful business. On the other hand, the U.S. Bureau of Labor Statistics says 50 percent of small businesses fail in five years.

Terrien is largely optimistic about self-employment for older workers, which he calls an "ageless startup." The numerous benefits he lists include the low cost of planning and launching a 1-person business, pursuing something you are passionate about, working as much or as little as you want, and working from home.

There are lots of information sources available if you are interested in starting a business, including Rick Terrien's book, Ageless Startup: Start a Business at Any Age.

For a little extra encouragement, an eGuide I wrote about starting a 1-person business is available free to Happily Rewired readers until May 31. To get your free eGuide, simply visit https://www.smashwords.com/books/view/177376. Use the code AG100 at checkout and you will be able to download the eGuide in the format of your choice, including EPUB, Mobi (Kindle) or PDF. Be sure to take advantage of this free offer by May 31.

I've been considering the breakneck speed at which things have changed. The fact is, we may never see what we thought of as "normal" again. At the risk of preaching to a Boomer choir, here's one way to plan for getting our lives back. I call it the three "re's."

Most of the states in our country are starting to re-open, so now is the time to consider how you will re-enter society. This is a very personal decision. Older Boomers and those with underlying conditions will likely be more conservative when thinking about getting back to everyday life outside the home. Should you go to the supermarket? Should you go to a dentist or doctor appointment? Should you go back into a work environment? You may be in a position to re-enter gradually and, over time, increase your external exposure. Every decision will take into account your health and the health of those living with you. You'll obviously consider the risks and rewards of what you do. For example, you may feel comfortable taking a short road trip, but you probably won't feel comfortable getting on an airplane for a long time.

As you plan your re-entry, you may also want to re-evaluate your whole situation. You need to consider all aspects of life -- health, job, volunteering, recreation, home, retirement, financial condition and so on -- in the context of a new normal. What short- and long-term consequences will the pandemic have on the way you live your life? What are the implications of the economic impact? What changes will you find it necessary to make? How has the pandemic affected how you think about your future plans?

Your re-evaluation may result in an unanticipated, unpleasant fact: You will be forced to re-trench. You may have to make new decisions about working, retiring, investing or just getting on with your life. You may have to modify some of your life goals or re-set your expectations. Some things may have to change just for a while and other things may change permanently. You'll probably have to find new ways to cope with a different reality.

The three "re's" is just one approach to facing adversity and rebuilding our lives. Those of us who see life's challenges as opportunities instead of problems will be in the best position to succeed.

Something is NOT Rotten in the State of Denmark 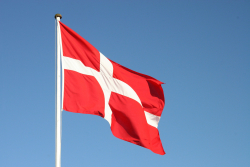 In a recent Opinion piece for The New York Times, Nicholas Kristof does an admirable job of proving the point. Kristof wrote:

"Denmark lowered new infections so successfully that last month it reopened elementary schools and day care centers as well as barber shops and physical therapy centers. ... Moreover, Danes kept their jobs. ... America's unemployment rate last month was 14.7 percent, but Denmark's is hovering in the range of 4 percent to 5 percent."

How did Denmark accomplish what America could not? Detractors say it's because Denmark practices something evil known as "democratic socialism." But in Denmark's case, democratic socialism seems to create a government that is a lot more empathetic toward the population than the American government. For example:

Danes are generally regarded as some of the happiest people in the world. They should be, if even a McDonald's worker is treated so well. In fact, everyone in Danish society is treated well. About 80 percent of Danes ages 16 to 64 work (a higher percentage than in the U.S.) and they work an average of 22 percent fewer hours than Americans. More than 80 percent of Danish workers are under collective bargaining contracts because Danish unions are strong. This is the kind of system that can sustain itself during something as devastating as a pandemic.

Well, well. Maybe this pandemic should give us pause to seriously consider why a great country like ours cannot come close to the social safety net provided by a country like Denmark. It certainly doesn't seem "rotten" to me.

Reader Comment: Without getting political, I've written a few blogs on how Scandinavian countries - despite frigid arctic temperatures and months of darkness, have the happiest people on the planet. This fact has always fascinated me. After all, we all do well to learn from other cultures. They do have a better handle on the coronavirus and are well-known for providing basic necessities including free university education, social security, universal health care, efficient infrastructure, paid family leave, and at least a month of vacation a year. But I also think we can learn a few lessons from the Norwegians and the way they live. They practice "hygge" which requires being present in a moment – whether the moment is simple, soothing, or special – that brings comfort, contentment, or pleasure. Norwegians have proven to be less materialistic than other cultures, appreciating low-cost activities and simple things in life. Working overtime or on weekends? Unheard of! These countries have harsh weather, but these people are a hearty bunch who show their appreciation for nature and the great outdoors year round. In winter, most Norwegians aren’t sitting in their houses all depressed. They can be found skiing, dog-sledding, snowboarding, snow-shoeing, and enjoying the spectacular northern lights. During summer months, they take advantage of the warmer weather to hike, swim, cycle, and sail. I think these happiness reports confirm that happiness has less to do with money and success and more to do with spirituality, our relationship with others, gratitude, a giving attitude, and being present and mindful. And maybe adding a little more hygge to our lives.

As Boomers, we might very well be conflicted about reopening the country after what, for most of us, has been two months or less of staying at home due to the coronavirus pandemic. Those of us who have been conscientious about self-isolation have probably figured out how to cope with a new way of carrying on our daily lives. Maybe it has involved lots more online ordering and grocery delivery, lots less face-to-face contact with family and friends, and lots of fun or frustration dealing with digital technologies such as Zoom.

No doubt we're feeling like we want to get back to something resembling "normal" behavior, especially with the advent of spring and summer weather. But I'm guessing you're cautiously optimistic, if not downright anxious, about what "reopening" will mean. You are not alone: A recent PBS NewsHour/NPR/Marist poll shows a large majority of Americans are concerned about it. Check out the results of the poll below: 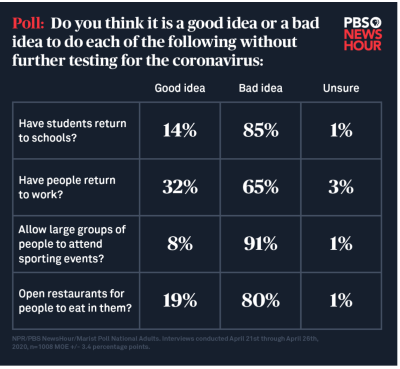 Clearly, we are all facing an uncomfortable reality. Thankfully, Boomers are wise enough to know that most choices in life have a risk/reward ratio associated with them. But this choice is a particularly difficult one: How long should we or can we cloister ourselves away, vs. when are we ready to take some risks and jump back into the stream of everyday life?

The decision may be more obvious for some of us than for others. For example, if you have health conditions that may compromise your immunity, or you take care of an elderly parent, you are far more likely to adopt a very conservative approach to reentry. If, on the other hand, you need to return to work and you cannot work from home, you may very well believe the reward is greater than the risk.

This is one of those times when no one has an easy answer. The decision will, in fact, be very different for everyone. Hopefully, each of us will make the right one.