When It Comes to Boomers, the Media is MIA 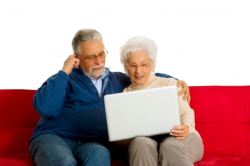 These days, the news media tends to be largely obsessed with politics and the world's ills. When it does cover human interest stories, however, the focus of attention often seems to be on the under-55 age group. Are we to assume from this coverage that there is nothing newsworthy about Boomers? Of course not -- but it is one more disturbing form of not-so-subtle ageism that sticks in one's craw.

In a recent post, I discussed the sad fact that the advertising industry actively practices ageism, as demonstrated in new research by AARP. Despite the size of the Boomer demographic in the U.S. -- about 74 million people -- and the reality that they hold the majority of America's wealth, advertisers choose to mostly ignore Boomers. In another post, I referenced the impact of global ageism, citing a quote from the World Health Organization (WHO), calling ageism "the most socially acceptable prejudice in the world."

What are we Boomers to think when the media, advertisers, employers and others marginalize us and discriminate against us for growing older? I have a theory about all of this, and it may sound a bit cynical. I believe American society is generally predisposed to accept and embrace youthfulness and shun growing older. We've been conditioned to it through the media. Magazine articles focus mostly on younger celebrities. Mainstream television shows and movies are youth-oriented, and older actors find it tough to get major roles. Advertising either emphasizes youth or peddles pharmaceuticals and adult diaper products to Boomer audiences in a condescending manner.

What is covered in the media is a reflection of society's values. If the media ignores Boomers, or worse, derides us, then one has to wonder whether we are valued in American society. We can only hope that such attitudes toward aging will change as more Americans age. Hopefully, they will realize that getting older is not "bad" -- it's an inevitable part of everyone's life.