If you were one of the fortunate students who took Latin in high school or college, you might recognize the two words that comprise the title of this blog post. It loosely translates into the well-known phrase, "Forewarned is forearmed." This phrase has special meaning for Boomers who are considering retirement: It cautions us to anticipate issues and challenges before taking the retirement plunge.

Lack of advance planning for retirement may be one of the most common problems Boomers face. One reason could be that they intend to keep working and simply don't plan to "retire" in the traditional sense. Another may be that retirement seems unrealistic or far off in the future. Intellectually, we all know we are aging, and some sort of retirement, or "second act" if you prefer, is inevitable. Emotionally, however, we may not want to admit that we will ever "retire."

Writing for The Balance, Wes Moss enumerates eight "headaches" that Boomers should avoid as they move closer to retirement. He discusses such issues as unexpected early retirement, the challenge of what to do with your time in retirement, the possible need to care for elderly parents, how retirement affects your relationship with your spouse, and the reality that you could outlive your money. His article is well worth reading.

The point is this: Boomers who have blinders on about retirement will only find themselves blind-sided if something unanticipated occurs. Life changes both small and large will happen as we age -- the only question is how well prepared we are for them.

"Praemonitus, Praemunitus" turns out to be excellent advice. 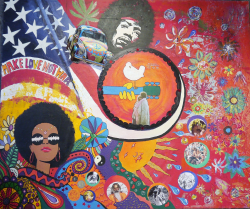 Surely you've noticed all the buzz in the last few weeks about the 50th anniversary of Woodstock (August 15 - 18, 1969). If you had the good fortune (or misfortune, in some cases) to be at that iconic event, you surely have a memory to last a lifetime.

I didn't make it to Woodstock, but I was keenly aware of it. The closest I came to a mini-Woodstock experience was attending a free concert in New York's Central Park. In August 1969, I was a New York University (NYU) student, about to enter my senior year. NYU was a hotbed of radical social protest and anti-war activity; I played a non-violent role as editor of a student satire magazine.

Most of us didn't know it at the time, but Woodstock would come to represent the aspirations of an entire generation. In a recent article for The New York Times, music critic Jon Pareles wrote, "Woodstock was a brief moment that would provide contradictory lessons for generations to come. It was entertainment that felt momentarily rebellious — 'a festival of peace and music' — that posited art as an alternative reality. ...It lived up to that 'peace and music' billing to gather an unexpectedly large, unexpectedly amiable community; it envisioned pleasure as a solution to societal strife, not merely a distraction from it. (That didn’t pan out.)"

Abbie Hoffman, co-founder of the Youth International Party, better known as the "Yippies," famously branded the Boomer generation "Woodstock Nation" in the event's honor, although he may have been projecting his own activism too broadly. The numbers were indeed impressive -- some one million people journeyed to Bethel, New York, where the Woodstock festival took place, and about half a million actually attended the event. However, the impact of Woodstock Nation is harder to define.

One could accurately view Woodstock as the culmination of an era of protest and unrest, largely influenced by young activists. The Sixties and early Seventies included such movements as civil rights, gay rights, women's liberation, environmentalism and anti-war, tinged with the hippie counterculture attributes of "sex, drugs and rock 'n' roll." While activists may have had the loudest voices, a segment of our generation preferred to align with the "Silent Majority."

Can we objectively credit Woodstock Nation with bringing about real change? Yes, the era's activists participated in movements that eventually brought about fundamental change, not the least of which was ending the Vietnam War. Still, fifty years after Woodstock, we face many of the same social and global challenges we protested against then. Why couldn't we sustain the vision of Woodstock Nation? It may simply be that our generation had to accept the reality of moving on in life -- earning a living, starting and supporting a family, saving for retirement and, for some, caring for our own parents. In short, we grew up.

Most of the Boomers I know are "doers." They need to be doing something to keep themselves busy, motivated and healthy. The older doers get, the more they realize that some of the things they have been  doing for years are now a lot more challenging. Broadly speaking, aging may make working long hours more tiring. It may make driving in traffic more stressful. It may make strenuous physical activity more difficult.

These kinds of challenges may cause one to contemplate retirement. When faced with retirement, the doer has a real dilemma. It is likely to be pretty scary. What will the doer do when he or she no longer has the multi-year career that was engaging? For some Boomers, their career may have even defined them as individuals.

In her article on NextAvenue.org, retired therapist Connie Zweig wrestles with this dilemma. She writes,"Like many boomers, I had found meaning and even love through my work. So, one part of me wanted to continue to do what I had always done: push hard to be productive so that I could enjoy a feeling of well-being at the end of the day. But another part wanted to leap into the unknown, letting go of old roles until a new beginning emerged."

Later in her insightful article, Zweig asks the question "Who Are We Beyond Work?" She found that she needed to ask herself "tough inner questions" to discover the answer. She pondered such questions as:

Zweig admits that her circumstances allowed her the freedom to consider different retirement paths, rather than be forced to continue to work because of financial need. Not everyone has the luxury of such a choice. Still, those Boomers who have the financial security to leave the workforce and do something else should be asking the kinds of questions Zweig asked herself. That may be the only way they will truly solve the doer dilemma.

Why a "Second Act" can be a Second Chance

Whatever their careers, most Boomers have spent a major portion of their lives working to provide for their families. If they've been successful at earning a good living and wisely managing their money, Boomers have a stellar opportunity -- a second chance if you will -- to play in a "second act." Generally, a second act refers to reinventing or rewiring retirement and doing something you are passionate about -- hopefully unconstrained by the need to earn a high income.

Everyone's definition of a second act is different. For some, it may involve a new, more flexible relationship with an existing employer to phase out of a full-time job into part-time work. For others, it could be transitioning into an entirely new career that generates more modest income. Still others define a second act as a combination of  working part-time, volunteering part-time and playing part-time.

How you define your second act is very much up to you -- but a big challenge many Boomers face is how to get there. Mary Kane, Associate Editor of Kiplinger's Retirement Report, writes about the process in her excellent article, "6 Steps to Finding Your Second Act in Retirement." She advises, "You’ll need to do both soul-searching and research first to understand which of your skills are transferable and how they can be useful. You’ll want to prepare well in advance to shore up your finances, paying off any debts and becoming accustomed to a different standard of living—perhaps living with less income on a trial run for a few months. You may need to mix volunteering with paid work, or find part-time work that will provide health coverage, to ease your transition and the stress on your wallet. And you’ll need to create a new professional network in your community, well beyond the circle of former colleagues and contacts you spent decades establishing in your previous career."

There's no question this transition can sound a bit intimidating, so Kane identifies six key steps on the path to a second act:

Kane describes each of these steps in her article and includes examples and input from retirement experts. It is offers very helpful guidance for starting a successful second act.