Making Sense of the Retirement Transition

More and more experts advise those closing in on retirement to view it as a transitional time. An article appearing on NextAvenue.org suggests that retirees should plan on a longer transition time than they expect:

"It could take months or it could take a few years for you to finally feel comfortable in your new skin. It’s completely natural and understandable for this transition to take a long time. After all, you were involved in the world of work for decades and those habits won’t melt away instantly. ... Instead of commuting to an office, commute to your workbench or to a class at the local community college. Embrace the change while diving into what makes you unique."

The article also encourages retirees to "take a moment to breathe":

"...take a week or two to relax before you jump into your new routines. By taking a mini-vacation first, you’ll be better prepared to approach your new life with a clear mind that’s well-rested and ready for the challenge. The way a honeymoon marks the transition from single life into marriage, this pre-retirement breather period marks another (equally) important transition in your life."

A key point in the article is the need to "build a strong mental foundation for change." This includes building a strong identity, a strong social network and a strong mission. "Mission" may not be a word you associate with retirement, but here's some excellent advice:

"One of the biggest fears people have about retirement is that they’ll lose the feeling of being useful. Figure out your mission, whether it’s helping look after grandkids or mentoring local teens on their career paths. Some find that learning a new language or hitting their list of must-see travel destinations around the world make wonderful missions, too!"

You have the ability to reinvent yourself as you enter life's second stage, but you don't have to rush into it. That may be hard, because our society is so focused on instant gratification. Still, if you take time to assess who you are and what you need to be happy, the transition should be a lot easier.

Proving Age Discrimination in Employment is Too Hard

A recent article in The New York Times got me fired up again about age discrimination in the American workplace, particularly when it comes to hiring and firing practices. I've written about this issue before, providing some links to useful online resources.

The Times article highlights the serious nature of the problem for workers over 50 years old. As the article points out, recent court decisions in age-related anti-discrimination cases have made things harder, not easier, for older workers. It's largely because of the way the federal ADEA (Age Discrimination in Employment Act) works, or doesn't work. As usual, when Congress writes a law, it carries with it loopholes -- and there are plenty of them in ADEA. Proving an employer uses age discrimination to hire or fire someone age 50 or over is difficult, and the legal burden is on the individual to pursue a case that can be very costly. What's more, doing so basically blacklists that individual in the job market.

The Times article cites this sobering fact: "More than half of workers over 50 lose longtime jobs before they are ready to retire..." along with this even more sobering fact: "On average, a 54-year-old job hunter will be unemployed for nearly a year." The article also reveals the experiences of some older job-seekers who faced obvious age discrimination. Some of the cases are startling in terms of what older workers are told by prospective employers; one of them reportedly said, "We are not looking for old white guys." Thankfully, that particular employer, a restaurant chain, was sued and agreed to pay a $2.85 million settlement.

The good news is some organizations are starting to fight back against age discrimination, even if individuals cannot afford to do so. According to the Times article, the Communications Workers of America, a union, has filed a lawsuit accusing hundreds of major employers of "systematic age discrimination in hiring based on targeted online advertising." They are looking at the possibility of class-action lawsuits. Still, a recent court ruling demonstrates an uphill battle: The court found that "recruiting practices that have the effect of screening out older applicants — what is known in legal terms as having a “disparate impact” — did not violate the law."

You would think that, with low unemployment and "Help Wanted" signs proliferating that older workers would be welcomed by employers. Sadly, that is not the case.

Financial Security in Retirement is Important, But... 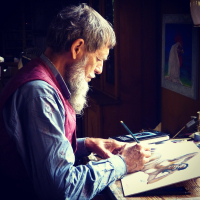 There are so many sources of information that talk about the financial aspects of retirement. Of course, nothing could be more important than being financial secure when you retire. But what about psychic security? One of the most challenging pieces of the retirement puzzle is finding your true self, especially if you have spent decades working in a single profession. Making the transition from a career into a whole different way of life -- one that may not be centered around full-time work -- can be disruptive and even painful for the ill-prepared.

That's why I like the assessment provided by Michael Rubin in his article for The Balance, "4 Non-Financial Keys for a Happy Retirement." Rubin discusses these four elements in detail:

Rubin's article puts retirement into perspective by emphasizing the non-financial aspects of a happy retirement. Food for thought.