What is Your Retirement Path?

In her new book, Too Young to be Old, Nancy Schlossberg researched and identifies six different paths to retirement. She writes about them in an excerpt on NextAvenue.org. While she reminds us that paths are not completely linear, and retirees choose paths in their own unique ways, the six paths she details are worthy of consideration. They are:

Continuers, writes Schlossberg, continue on a path similar to pre-retirement but make modifications, while Adventurers see retirement as an opportunity to do something brand new. Easy Gliders take a more laid back approach, while Involved Spectators stay involved with their previous careers. Searchers continue to seek their niche, while Retreaters either disengage before finding out what's next or become depressed and unmotivated.

Has Nancy identified a retirement path that resonates with you? Are you on a path that is really a combination of the above paths, or have you discovered a path of your own? Read Nancy's NextAvenue article here, and consider buying her book here:

Too Young to Be Old: Love, Learn, Work, and Play as You Age (Lifetools: Books for the General Public Series)

Will Self-Driving Cars Help Reduce the Loss of Independence?

According to a recent article in The New York Times, "Nearly 16 million people 65 and older live in communities where public transportation is poor or nonexistent. That number is expected to grow rapidly as baby boomers remain outside of cities." The article went on to discuss why self-driving cars may be the answer for such aging Boomers. Joseph Coughlin, the director of the MIT AgeLab, was quoted in the article, saying, “The aging of the population converging with autonomous vehicles might close the coming mobility gap for an aging society.” Coughlin also said that 92 percent of older people want to age in place.

Reading this article got me thinking about the larger issue for aging Boomers: the loss of independence. I lived through the loss of independence with my mother over fifteen years ago. When she broke her hip in her late eighties, her independence became a thing of the past. It also led to a quick decline. Coupled with the onset of dementia, her physical and mental infirmities made it impossible for her to age in place. After trying to maintain her independence in her condominium with the help of home health care aides, I had to make the decision to move her to a nursing home. She died not long after the relocation.

Today, my wife is the primary caretaker for her 93-year old mother. While her mother is in excellent health and lives independently, she can no longer drive. Whether it's shopping, day trips, or short outings, my wife and I take responsibility for the transportation.

Caring for older parents is increasingly common among Boomers, even as they age themselves. It offers a look into our own future as we see first-hand what it would be like to lose our independence. For some of us, aging in place may be a viable option. For others with means, an assisted living facility or continuing care retirement community may be the answer. Today, there's always Uber and Lyft, but tomorrow, it sure would be nice to know that such things as self-driving cars could extend our independence as long as possible.

MacLaine Shines in "The Last Word" 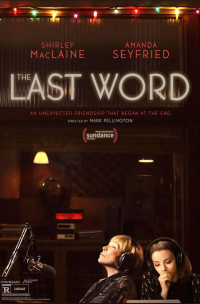 Every once in a while, I like to talk about a movie that I think has special relevance to Boomers. "The Last Word" starring Shirley MacLaine is a quirky movie that may have slipped under your radar since it had a limited release and didn't get stellar reviews (which usually means it's worth seeing!). My wife and I are likely to see any movie that features Shirley MacLaine (now a spry 82 years old), and we were not disappointed in this one.

MacLaine plays Harriet Lauler, a retired adwoman who is brash, strong willed and at times irascible. Lauler applies her knack for selling products during her career to an unusual desire: She wants to have her obituary created before she dies. This leads to her enlisting Anne Sherman, a young journalist played by Amanda Seyfried, to write the obituary. It would be accurate to define the movie as a dark comedy.

I'd rather not share more of the plot since it will give away too much. Suffice it to say that MacLaine shines like a very bright light, somehow acting the part with gruffness and warmth at the same time. She turns Lauler into a fascinating character study of a very successful businesswoman who has a giant hole in her personal life. One of the more interesting aspects of the movie is Lauler's mother-like relationship with Sherman and grandmother-like relationship with an adorable waif.

There are many messages in this movie about life, love, relationships, and redemption lost and found. MacLaine's tour de force is reason enough to see it. My wife and I, however, rate movies on the basis of whether or not we have something to talk about when we leave the theater, and "The Last Word" prompted a lively discussion.

Looking for a Second Career? Start with Questions

Pursuing a second career can be equal parts rewarding and scary. It may make sense to work in a field you're most familiar with, but it also might be that your goal is to do something completely different with your life during your "second act."

As with any research project (and that's what finding a second career really is), you won't have all the information you need to make a well-considered decision without asking the right questions. My retirement colleague Nancy Collamer, who I've quoted numerous times in the past, can help with that. Her article for U.S. News, "10 Questions to Help You Discover a Fulfilling Second-Act Career," is the perfect starting point.

Nancy says that the transition to a second-act career will be easier "when you build on at least a small piece of what you currently do." That was my experience: After I sold the direct marketing agency I started, I briefly worked for an ad agency in a senior marketing position. When I decided to retire from the agency, I leveraged my writing skill to become a freelance marketing writer and book reviewer. It was a relatively easy transition for me since I always loved to write. I also used my skills from starting and running a business to help my wife launch her own small business. (You can read the story of that business in our book, Let's Make Money, Honey: The Couple's Guide to Starting a Service Business.)

These are a few of the ten questions Nancy suggests asking yourself before striking out on your own.

1. What opportunities, services or products are currently being overlooked in your industry?

2. Which of your skills could you market on a freelance and flexible basis?

3. Do you have technology-related expertise that could help someone become more efficient or profitable?

4. What tools can you create to make it easier for people to do their job, accomplish their goals or enjoy their hobbies?

See the other six questions, along with some additional helpful advice, in the complete article, which you can read here:
http://money.usnews.com/money/blogs/on-retirement/articles/2017-03-17/10-questions-to-help-you-discover-a-fulfilling-second-act-career