I've written before about the older entrepreneur phenomenon. For many years through the Small Business Center at my local community college, I counseled hundreds of small business owners in branding and marketing. A considerable percentage of those business owners were 50 or older.

A recent New York Times article confirms the high level of interest in business ownership by Boomers. The article cites a compelling statistic: According to the Small Business Administration (SBA), "one in four people between 44 and 70 are interested in becoming entrepreneurs." The article also mentions that the Ewing Marion Kauffman Foundation, which studies entrepreneurship, found that over 24 percent of new entrepreneurs in 2015 were 55 to 64 years of age.

When you think about it, Boomers are perfectly positioned to go out on their own. Unlike younger entrepreneurs, Boomers have already acquired a portfolio of skills and a wealth of knowledge, distilled from their own careers working for someone else. Both their business experience and their maturity combine to make them credible business owners and potentially reduce the risks of starting a new business. Still, many Boomers may lack the funding or confidence to take the plunge. That's why it's encouraging to see more and more programs popping up in support of older entrepreneurs. The Times article references a number of such programs around the country, including a partnership between AARP and the SBA.

As I've mentioned before, I'm an example of the older entrepreneur trend. My wife and I leveraged our skills and started a small service business together in our fifties, ran it successfully for seven years, and then sold it. Operating our business was a great midlife experience that allowed us to do something we enjoyed and generate income after we left our professional careers. Admittedly, not every couple can work together, but it worked for us.

So if you have the urge to start a business, know that you are in good company. There are plenty of Boomers doing the same thing.

Why Ageism Hurts Everyone

Those of us over 60 -- and even those of us over 50 -- have a sneaky suspicion that those under 50 are somewhat prejudiced against us. No, this isn't paranoia, it is reality. And it is especially real in the workplace.

Ashton Applewhite, someone who writes about ageism and author of the book, This Chair Rocks, could not have said it better in her recent New York Times article, "You're How Old? We'll Be in Touch."

She asks why can't Americans over 50 find work? Her answer: "The problem is ageism -- discrimination on the basis of age. A dumb and destructive obsession with youth is so extreme that experience has become a liability. ... Age discrimination in employment is illegal, but two-thirds of older job seekers report encountering it."

Later, she makes a wise observation regarding attitudes in the workplace about both young and old workers:

"Age prejudice -- assuming that someone is too old or too young to handle a task or take on a responsibility -- cramps prospects for everyone, old or young. ... Unless we tackle age bias, [Millennials] too are likely to become less employable through no fault of their own, and sooner than they might think."

Finally, Applewhite lobbies for real activism on the issue:

"What is achieving age diversity going to take? Nothing less than a mass movement, like the women's movement... Confronting ageism means making friends of all ages. It means pointing out bias when you encounter it (when everyone at a meeting is the same age, for example).

"Confronting ageism means joining forces. It means seeing older people not as alien and 'other,' but as us -- future us, that is."

These are surely some of the wisest words I've read about age discrimination, which seems to be deeply embedded in our culture. Boomers and those beyond the Boomer generation are, statistically, a significant portion of this country's population, and it is the Boomer generation that holds the nation's greatest wealth. Our sheer numbers alone should give us the power to stand up against ageism. We all should do just that when we suspect someone we know is being discriminated against because of age. 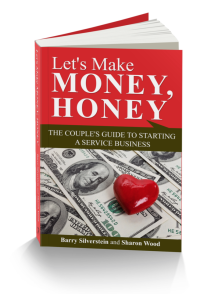 This month, I'm celebrating the one year anniversary of the publication of my book, Let's Make Money, Honey: The Couple's Guide to Starting a Service Business.

To take advantage of this special offer, you must order the book here: www.createspace.com/5616668

When you check out, enter this code: GKYC7AGA to get your $6 per copy discount.

If you have ever considered going into business with your spouse or significant other, this book is a must-read. It has received rave reviews from reviewers and readers alike.

Save $6 on the print edition when you order now!

Some interesting research suggests that people who work longer actually live longer, according to the Center for Retirement Research at Boston College. The Center cites the following study:

"A new study in the Journal of Epidemiology and Community Health found strong evidence that older workers who retire even one year later have lower mortality rates.  This held true for both healthy and unhealthy people."

The Center goes on to describe the study:

"The researchers at Oregon State and Colorado State used a survey of older workers to follow some 3,000 people who were employed in 1992 but had retired by 2010.  Since health drives mortality and is a factor in deciding when to retire, they separated their research subjects into two groups – healthy and unhealthy – to see if they had different results.

"The healthy people were more likely to be physically active, non-smokers with a lower body mass index and fewer chronic medical conditions.  Other research has shown that having meaningful work can also contribute to health at older ages.

"Over the period of the study, one in four unhealthy retirees died, compared with just about one in 10 healthy people. But the survival odds improved for people in both groups who retired after age 65, reducing the risk of healthy people dying by 11 percent and unhealthy people by 9 percent for each year of delay."

I guess Boomers should take this to heart. Many of us have to work past retirement age to generate income... but at least if you work longer, you just might live longer!

What Does the Uptick in 65-Plus Employment Mean?

Consider these statistics from the Pew Research Center:

"More older Americans – those ages 65 and older – are working than at any time since the turn of the century, and today’s older workers are spending more time on the job than did their peers in previous years, according to a new Pew Research Center analysis of employment data from the federal Bureau of Labor Statistics.

"In May, 18.8% of Americans ages 65 and older, or nearly 9 million people, reported being employed full- or part-time, continuing a steady increase that dates to at least 2000 (which is as far back as we took our analysis). In May of that year, just 12.8% of 65-and-older Americans, or about 4 million people, said they were working."

"Not only are more older Americans working, more of them are working full-time. In May 2000, 46.1% of workers ages 65 and older were working fewer than 35 hours a week (the BLS’ cutoff for full-time status). The part-time share has fallen steadily, so that by last month only 36.1% of 65-and-older workers were part-time."

So, nearly 20 percent of those 65 and older are in the workforce, and more than half of those older workers work 35 hours or more. Undoubtedly, this remarkable generational shift is driven by financial need, but there is probably more to it than that. Older workers continue to work not just for income, but because it demonstrates self-worth.

Boomers I've connected with often feel as if our society treats them as obsolete. It is a sad commentary that someone in their sixties or even fifties experiences age discrimination in the workplace. What happened to employers that once respected experience, stability, job longevity, and employer loyalty? If people are capable, healthy, and vibrant well into their seventies, are they any less employable than younger workers? Those employers who embrace older workers recognize their value as employees. Employers who encourage competent older workers to leave are doing them and their companies a disservice.

The larger issue, though, is a societal one. We as a society must learn to respect people as they age, instead of ridiculing the elderly and celebrating only youth. Everyone will grow old eventually. But today, society's perception of growing old needs to change for the better.