You know how myths develop a life of their own and become mistaken for fact? This has never been more true when it comes to aging. That's why, when I read the eight top myths about aging on Senior Planet, I didn't know whether to laugh or to cry. The myths perpetrated against the elderly are something to behold. Here are just three myths that are all too common, according to gerontologist Joan Erber, co-author of the book, Great Myths of Aging:

It is often said that older people are far and away the demographic that is most vulnerable when it comes to scams. Actually, says Erber, people in their 80s and 90s may be more trusting, but they are no more gullible than young people. The reason it appears more older people are scammed, she says, is likely that they are targeted more often because of their perceived nest eggs. In addition, older people are less likely to report fraud.

"If you live long enough you'll wind up in a nursing home."

Not true, says Erber; in fact, "only a small minority of old people wind up in nursing homes." In 2011, for example, less than 4 percent (3.6 percent) of people age 65 and older lived in institutional settings. The trend today is for older people to "age in place."

Yes, certain cognitive abilities (short term memory, for example) decline with age. However, "a recent study about aging and wisdom concluded that older people are more likely to look at things from multiple perspectives, allow for compromise and recognize that knowledge has limits."

It would serve our generation well if we were to continue to set examples that bust up myths like these. For more myths, go to Senior Planet.

Creating a Company Over Age 50

Entrepreneurship is alive and well -- surprisingly, especially over the age of 50. It's logical in some respects for the 50-plus set to be thinking about starting a business. Careers in later years seem to decline for any number of reasons, including layoffs, age discrimination, and burnout. The good news is that creating a company over the age of 50 can be an invigorating experience.

Michael Glauser's new book, Main Street Entrepreneur, doesn't concentrate exclusively on entrepreneurs age 50 and older. Still, almost half of the hundred small town business owners he met during his research trip across America were in that age group. Glauser tells Richard Eisenberg of NextAvenue.org that these entrepreneurs have advantages: "The obvious one is that they've been in an industry for a number of years, so they really know it and related industries. ... The second thing is they know how business works; they're not young or naive. And they're pretty sure their business idea will work before they launch it."

Glauser also notes that this is a great time to start a company. "There's a growing preference for small, local companies," he says. "Also, powerful technologies now let you do business with the same kind of tech equipment that only large corporations could afford in the past." In addition, says Glauser, "there are a lot of new financing formats, like crowdfunding, to test products before you spend a lot of money on them."

By the way, my wife and I are proof positive of what Glauser learned. We started a small, local service company in our mid-fifties and ran it successfully for seven years before we sold it. You can read about our experiences in our book, Let's Make Money, Honey: The Couple's Guide to Starting a Service Business.

Genius: A Thoughtful Movie for Adults

I don't know about you, but my wife and I have become a lot more selective in the movies we watch. We detest violence and cruelty, both of which continue to pre-occupy many movie makers. Instead, we lean towards "message" movies that we perceive will have some lasting value. 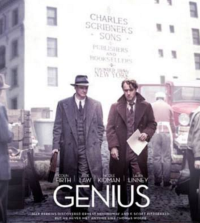 Genius is in that category. This movie chronicles the short writing career of Thomas Wolfe, focusing on his relationship with his editor, Max Perkins. Genius is very much a period piece, taking place in the 1920s. It really has the look and feel of an older era in the dress, the lifestyle, the book publishing business, and even in the way it is lit.

Of course, a fine movie is nothing without a story and excellent actors, and Genius has these elements as well. We got real insight into the way Wolfe and Perkins developed a relationship, the psyche of Wolfe, the instability of his wife, and the toll working with Wolfe took on Perkins's personal life. We witnessed tour de force performances from Colin Firth as Perkins and especially Jude Law as Wolfe. Law was as believable a troubled genius as any I've seen on screen. The movie itself was understated, almost to the extent that it felt more like a play than a movie -- but its strength as a dramatic film was impressive. This is a movie for adults.

My wife and I often judge the quality of a movie based on whether we think about it and talk about it well after we finish watching it. For us, Genius was one of those movies.

Celebrating Our National Parks at 100 Years

On August 25 of this year, the National Park Service turns 100 years old. I think this deserves special recognition from the Boomer generation, since our lives have surely been enriched by these places of exceptional natural beauty.

My first memories of National Parks are probably similar to yours. I remember when my parents took us on a cross-country trip, westward bound from New York, driving all the way. It was the Fifties and Americans were in love with autos. Among the unforgettable sights I saw were Yellowstone National Park and the Grand Canyon. Ever since, our National Parks have left me awe-inspired.

Stories about America's National Parks abound, from the Ken Burns film about National Parks on PBS to tales of people who have made it their goal to visit every National Park (there are more than 400 of them) before they die. There is even a club devoted to visiting all of the National Parks.

Do yourself a life-changing favor: If you haven't visited a National Park lately, do it. If you are 62 years of age or older, you can probably do it for free. Why? Because your age qualifies you for a "Senior Pass," good for lifetime free admission to over 2,000 Federal recreation sites, including National Parks, National Wildlife Refuges, and many National Forest lands. The Pass is just $10 if you pick it up in person (driver's license or other government ID required), or $20 by mail. Download an application below.

Power to the (Older) People

You probably remember one of the slogans of our youth, "Power to the People." Today, we might be able to modify that slogan to proclaim, "Power to the Older People." Perhaps you don't realize it, but the Boomer generation is today and in the near future the most influential in terms of economic impact.

The McKinsey Global Institute, a division of consulting firm McKinsey and Company, recently analyzed the 60+ age group globally in its report, "Urban World: The Global Consumers to Watch." According to the report:

"The largest elderly consumer markets today are in developed economies where their number will grow by a third between 2015 and 2030. These consumers will generate 20% of global consumption growth over this period. In comparison, European millennials will contribute less than 2%.

"In the United States, they will contribute more than 40% of consumption growth in housing, transport, and entertainment. People over 50 bought over 60% of the new cars sold in the United States in 2010, up from less than 40% in 2001, according to one study. The elderly increasingly want to age in their own homes. A decade ago, U.S. citizens aged 55 and older accounted for less than 33% of all spending on home improvement. By 2011, this share was more than 45%."

The bottom line is our age group has considerable economic power, and increasingly, companies will need to cater to us with products and services that meet our needs. So take advantage of your age and repeat after me: Power to the Older People!