Movies for Boomers: "Bridge of Spies" Offers a Jolt of Nostalgia

It is no accident that Hollywood is producing more movies for Boomers. Our generation has the time and money to go to the movies to be entertained, and Hollywood knows it. Fellow Boomer Steven Spielberg, arguably one of the greatest directors ever, offers a jolt of nostalgia in his latest production, "Bridge of Spies." 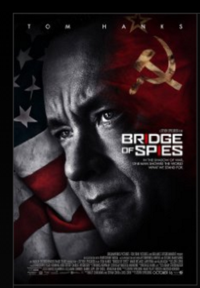 If you haven't read the reviews or seen the movie yet, this is a Cold War-era drama, based on a true story, about James Donovan, an American attorney (brilliantly portrayed by Tom Hanks) who defends a Russian spy. It becomes a far more complex tale as the movie unfolds. I want to concentrate, though, on the non-plot elements that will undoubtedly jog Boomers' memories of their childhood.

If you grew up in the 1950s and early 60's, you were sure to be affected one way or the other by the Cold War. The nostalgic aspects of this movie surround you with all sorts of images from that time in our history. I could easily relate to the scenes of school children being so scared of "the bomb" that they would burst out crying. The fabric of the film also reinforces the era. The scenes of family meals, black-and-white TV shows, those infamous TV dinners, the working dad and the stay-at-home mom... all of these resonated with me as a throwback to my childhood. Spielberg did a masterful job with the authenticity of what streets, cars, modes of dress, houses, and apartments looked like. And he really captured the Cold War hysteria we all felt.

So in addition to being a good story and an engaging movie, "Bridge of Spies" is a giant jolt of nostalgia! Go see it.