A Second Act with Purpose

It's heartening to know that seniors aspire to give back and do good in the second half of their lives. A survey conducted by Encore.org indicates that 4.5 million people ages 50 to 70 say they are working in "encore careers" today, and another 21 million are preparing to do the same. Encore careers, according to Encore.org, are defined as "working after midlife in roles that address important social needs."

Subtly Plying the Waters of Retirement: "I'll See You in My Dreams"

"I'll See You in My Dreams" is a movie that some may call a sleeper: It might seem fairly innocent and maybe even inconsequential at first blush, but it could leave a lasting impression that is hard to get out of your mind. 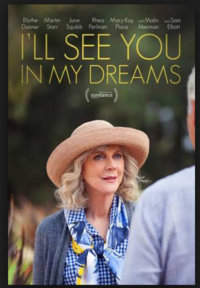 One of the reasons this film makes an impact is the nuanced acting of Blythe Danner as Carol, a widowed woman who seems to bump into mortality at every turn. While Danner clearly shines as the main character, there are a lot of other things to like about this understated little gem. For instance, Carol's platonic relationship with a much younger man (misinterpreted by one of Carol's friends) is a mature theme too often overlooked in movies. Sam Elliott's Bill, Carol's unexpected love interest, is himself an engaging, complex character. Carol's cliquish friends set an amusing undertone while helping to portray the realism of life in a retirement community. At least two scenes -- one in which Carol speed dates and another in which she and her friends get high on pot -- are laugh-out-loud funny.

Humor, however, is not the primary point of "I'll See You in My Dreams;" it has a bittersweet feel to it that exposes the vulnerability of our later years, in particular, the pain women may endure. This is a movie that had me thinking about it long after I exited the theatre. I recommend it.

Tags: Blythe Danner, I'll See You in My Dreams

Much to be Gained from Volunteering

For some boomers and seniors, volunteering could be a path to fulfillment. Once you get over the societal pressure of having to earn a living, you might find that giving back generates its own kind of tangible reward.

For many years, I have volunteered as a branding and marketing counselor at a small business center operated by a local community college. I get to help entrepreneurs start or improve their businesses. I can use the knowledge I gained as a marketer during my professional career -- and it prompts me to keep current on the ever-changing marketing world. My wife, who was a professional dog groomer for ten years, retired and now grooms dogs on a volunteer basis for a local humane society. She gets a great deal of satisfaction turning dirty, matted dogs into adoptable cuties.

Your later years could be the time when you pursue or discover a passion that turns into a gratifying volunteer opportunity. Kathryn Lance, for example, writes for Next Avenue about her transition from a professional writer to docent. She not only shares her experiences as a docent, she offers helpful examples about where to find docent positions.

Working in Your Later Years: The Reality Gap

I've written previously about the disconnect between older workers who want to keep working and a job market that isn't always receptive to keeping older workers employed. Some recent data supports the fact that being employed in your later years can be quite a challenge, but the news isn't all negative.

A study published in May by the Center for a Secure Retirement, sponsored by Bankers Life, indicates that, of retired boomers who are not currently employed, almost half (48 percent) would like to work but are unable to work, most often because of health reasons. Half (49 percent) of employed middle-income boomer retirees expect to work beyond age 70 or as long as their health will allow. Nearly three-quarters (72 percent) of employed retirees say that their per hour compensation is less than it was before retirement. Nearly nine out of ten (88 percent) employed boomers have work arrangements other than full time.

Still, working after retirement is viewed in generally positive terms. More than three-quarters (78 percent) of employed retirees claim they are as satisfied or more satisfied with their job compared to pre-retirement work. Employed retirees generally report lower stress levels and better relationships than their nonworking counterparts. Six in ten (59 percent) employed retirees say the primary reasons they work are non-financial. For some -- 42 percent -- working after retirement means self-employment or small business ownership. You can download the complete report at the link below.

If Necessity is the Mother of Invention...

Here's an interesting statistic: Over 60 percent of the membership of the United Inventors Association is over 50, according to John Calvert, the association's executive director. "There's a boom in inventions by people over 50," he tells The New York Times.

The Times article, entitled "More Older Adults are Becoming Inventors," profiles several inventors, some in their 70s and 80s.  James West, 84, "obtained 11 patents when he was over 60." He tells the Times, "Anyone can be equally inventive at 75 as at 40. It's having the time to bring ideas to fruition. ...Bringing something new into the world is exciting and extremely rewarding."

Still, inventing is for risk-takers. It isn't just coming up with the ideas -- it's also making product prototypes, applying for patents, getting funding, and more. That's why "only 2 to 3 percent of all inventors make any money from their inventions," experts told the Times.

Nonetheless, if you like to generate ideas or make things, you might be the type of adventurous soul who could invent an encore career by becoming an inventor. Read the article to learn more.

For some in the second half of life, doing meaningful work is a priority. Still, as Susan Cramm writes for Strategy + Business, "as we get older, we put more weight on what we could lose than on what we might gain — and developing conviction to pursue our dreams becomes more difficult." That's why she recommends following some "easy-to-describe but difficult-to-practice" principles:

Read Susan's entire article here (including more detail about the above four principles and some inspiring examples).

Travel as an Avocation

Boomers like to travel, especially those classified as "affluent" (household income of $75,000 per year or more). In the next twelve months, 82 percent of affluent boomers plan to take a pleasure trip, according to a recent survey by the Shullman Research Center, a firm that specializes in providing marketing insights into affluent and luxury markets.

Where do boomers like to go? Almost three quarters (74 percent) say they'll take trips within the U.S., while 27 percent intend to travel outside the country. Over half (55 percent) say they consider travel to a specific destination. As for international travel, Europe remains the top destination (61 percent) with the Caribbean in second place (48 percent); Canada is third (33 percent).

While travel in later years can be a hassle for some, it is a treasured avocation for others, depending on their financial ability, of course. I've run across older travelers who return to the same spot or take the same cruise year after year, while others are more adventurous and plan visits to new destinations with every trip. Some wouldn't consider going on a tour, preferring to make their own arrangements, while others won't go any other way, leaving the logistics to someone else to worry about.

Whatever your style, travel itself is a privilege -- and just another way to rewire your retirement.